When you’re down, or not feeling well, nothing makes you better than a big bowl of comfort food.

Maddie had to have blood drawn for an allergy test. We suspect she has a peanut allergy after a little episode we had a few months ago. We were eating banana pancakes one Sunday morning, I slathered some peanut butter and jelly on them for her, and a few minutes after eating, her lips were as puffed up as Lisa Rinna’s! She looked like a duck. A frantic call to our pediatrician’s weekend hotline, and a little infant Benadryl did the trick, but we have avoided peanuts since then. As a result, we decided to get her tested to see if she does, in fact, have an allergy, or if it was just a fluke.

My poor baby. Nothing is worse than watching someone you love in pain. They couldn’t get enough blood out of one arm, so they had to draw from the other one as well while I held her, sang to her, and a nurse blew bubbles. It wasn’t fun.

Anyway, I wanted to have something hot, delicious, and comforting ready for dinner when we got home. Maddie loves my shepherd’s pie, which I usually make with ground beef, mashed potatoes, and lots of veggies, but I wanted to try something a little different, and more nutritious. So, I traded the beef for turkey, and the mashed potatoes for a butternut squash/sweet potato/carrot mash. It was the perfect combination of sweet and savory, and we all loved it.

Another great thing about shepherd’s pie – it’s an excellent freezer meal. Anytime I make it, I double the recipe so I can freeze one to have on a night when I know I’ll be working late, or if I just don’t feel like cooking. There is always at least one night like that during the week. Just take the dish out of the freezer on Sunday night, and by the time you’re ready to cook it that week, it should be defrosted enough to go right in the oven.

When I cook, I try to incorporate as many veggies as possible in all the meals we eat. I don’t believe in hiding veggies to get Maddie to eat them. I want her to see them, smell them, and taste them. My hope is that by doing this, she will grow up loving veggies like I did. It’s working so far… We’ll see how it goes as she grows.

Baby Led Weaning (BLW) Note: We started BLW, a fancy way to say letting your child feed themselves, at 6 months. We skipped the purees, and went straight to solid food. She eats what we eat, when we eat. It is fun, convenient, and she eats everything! Maddie is now 13 months. She has a few front teeth and no molars, but babies do not need teeth to eat solid food. They chew/crush the food with their gums, which are very strong. I will continue to post recipes, videos and tales of our BLW journey on the blog, so stay tuned! 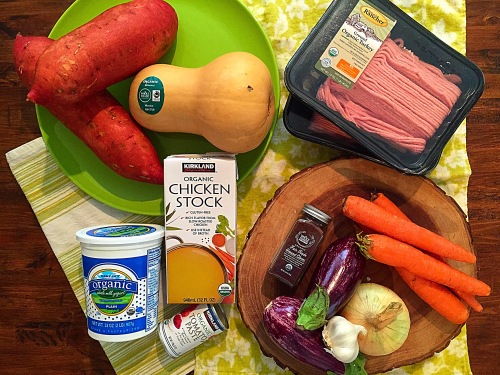 Preheat the oven to 400 degrees.

I start by getting everything prepped for the mash. Once the veggies are chopped, I toss them in a large bowl with the smashed garlic, the spices, salt, pepper, and enough olive oil to coat everything. Spread them evenly in a single layer on lined baking sheets (I had to use three), and then put them in the oven. 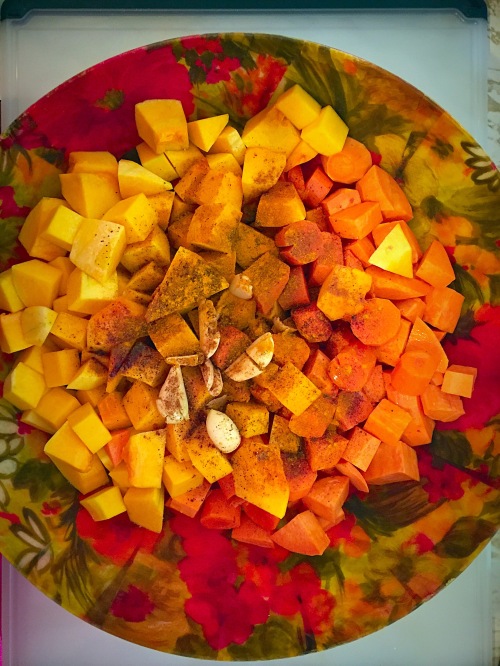 While your veggies are roasting, you can start to work on your meat mixture. Warm a large frying pan on medium high heat, and coat the bottom with olive oil – about three tbsp. Once the oil is warm, but not smoking, add your eggplant, onion, and carrots. Add salt and pepper, and sauté until the veggies are lightly browned – about five minutes.

Note: eggplant is like a sponge, so you may need to add more oil.

Once the veggies are browned, add the ground turkey to the skillet, breaking it up with a wooden spoon. Let the meat brown, until it is no longer pink. If there is a lot of grease from the meat, you want to remove it. A little is okay, but you don’t want the dish to be greasy. You can either spoon it out, or use a paper towel or piece of bread to soak it up. I usually use a few paper towels. Weird, but it works.

When the meat is browned, add the spices and the can of tomato paste. Stir to incorporate as much as possible, and then stir in the chicken stock and vinegar. Let it come to a boil, and then reduce the heat to a simmer and cover with the lid slightly ajar to release the steam.

Your veggies should be done roasting by now. They’re finished when they are soft enough to pierce through with a knife or toothpick. Transfer the veggies from the baking sheets back to the big bowl. Add your yogurt, spices, and salt and pepper, and mash until it is the consistency you like.

Note: When I am making a mash, I like to start with a manual masher and finish with an electric mixer. My mixer goes from off to mega speed on the first setting so I have to be careful, or my kitchen will be wall to wall with potatoes. Mashing first with the manual helps.

If you’re home alone, you get to lick the electric mixer thingies all by yourself. If your family is home, you’ll most likely have to share. Stan and Maddie were out, but I had two sets of doggy eyes staring at me the whole time, so I let Reese and Sadie go to town on them.

Your meat mixture should be finished by now. Give it a taste to see if you need to add any seasoning.

I used two 8×8 baking dishes, and had just enough to fill both. I divided the meat mixture between the two dishes, and then topped with the mash.

When you’re ready to finish preparing it for dinner, put it in a 375 degree preheated oven, and let it cook until it’s golden and bubbly. About 15-20 minutes.

This meal is definitely good enough on its own, but would also be great with a salad or a green veg. I had some organic zucchini in the fridge, which were starting to get soft, so I cut them in half-coins, tossed them with olive oil, balsamic vinegar, salt and pepper, and roasted them in the oven while shepherd’s pie was cooking.

Stan walked in the house and said “It smells like Christmas!”

As you can see in the video, Maddie loved it. I tend to give her gigantic, adult-sized portions, so Stan and I helped her eat what was on her plate, but she had a healthy helping for dinner that night. She even ate the zucchini!

We had fresh cherries for dessert. Maddie could not get enough of them! She kept signing to have more and more. I bit them in half, and removed the seed. A little more Alicia Silverstone than I’m used to, but whatever.

From my kitchen to yours, I hope you and your family enjoy this meal. Let me know how it goes if you do!

Inspired by my husband, Stan, and our two daughters, my greatest passion is sharing simple solutions for switching to safer, while creating a healthy, nourishing, love-filled home.